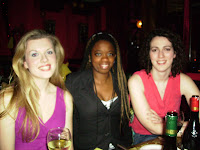 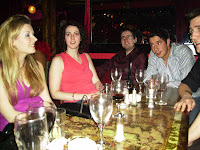 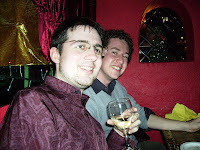 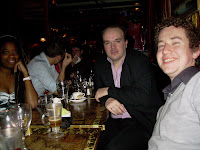 Posted by London South Team at 05:26 No comments:

I was invited by Iain Dale to appear on 18 Doughty Street with Alice (a fellow CF activist) and Alex (an ex-Labour candidate).

Log onto and tell me what you think: www.18doughtystreet.com
Posted by London South Team at 12:22 No comments:

Two weeks ago I was invited by Bob Neil MP to attend his constituencies Annual Dinner.

It was a wonderful evening and I was pleased to meet several active CF members there. The Rt Hon William Hague MP was the guest speaker and I now know why people will pay the high prices for his after dinner speeches!

He was amazing and kept us all entertained with his jokes about Gordon Brown and Tony Blair.

In the next coming months Bob Neil, his Association and myself will be planning effective ways on how we can increase CF membership and activity in this ward. Even though Bromley and Chistlehurst is a safe Consertive seat we can never relax and sit back- we must continue to work hard and campaign here.

Watch this space for the launch party of Bromley and Chistlehurst CF group.....
Posted by London South Team at 12:17 1 comment:

Events for your Diary

Described by 'The London Eating Guide 2005' as; 'One of Croydon's hidden gems' this place is guaranteed to get all of our membership coming out on a cold winter's night.

Dress: Smart and sexy!
Price: £18 a head (£5 deposit before December 31st and remaining amount to be paid on the night)

To make a reservation or if you need more information please e-mail Simon Hoar at: simonjameshoar@hotmail.com
Posted by London South Team at 09:24 No comments:

Meeting Thatcher at the CWF Dinner 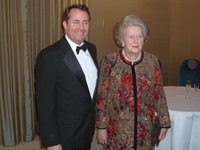 It was a magnificent event and at the beginning of the evening Lady Thatcher walked around the champagne reception where she was greeted by some of the guests. Myself and some fellow London South CF members managed to talk to her for quite a while and during this time the photographer managed to get a picture of us all with her.
After the meal Dr. Liam Fox MP spoke and it was brilliant- I bet there were a few people in the room kicking themselves by voting for Cameron in the leadership elections. The end of his speech was rounded off by thunderous applause with the majority of the hundred CF guests standing up.

To finish the evening off there was an auction that raised over £24,000.

This was an excellent event and next year London South will aim to get at least thirty members along.
Posted by London South Team at 09:15 No comments:

On Saturday, Conservative Future held a woman's conference at CCHQ and as one of the few female Area Chairs in the UK I felt obliged to attend. The delegates came from as afar as Edinburgh and Devon and we all seemed to get on really well.

Even though I've been in Conservative Future for over seven years I learnt a lot. The conference was interesting and even though I was a little late I still managed to hear the new CF executive speak. Mark Clarke who is the new CF Chairman is really changing CF for the better. He seems to be addressing female issues that most male members have previously ignored.

Our aim of setting up three new branches across London South by May 2007 is strongly supported by Mark and his executive.
Posted by London South Team at 05:25 No comments: 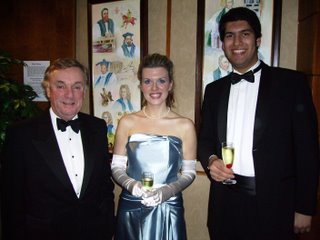 Last Friday, Croydon Conservative Future held a ball at the Hilton hotel in Croydon. Over one hundred guests attended and they came as far as Exeter, Hull, Edinburgh and Lancaster.

The theme was, 'Bond' and this event coincided with the release of the Casino Royale film.

After a few glasses of wine and magic tricks everyone was called to be silent as the after dinner speaker Richard Ottaway MP spoke. He regaled the room with a few jokes and one of them caused a raised eyebrow on an older guests face! However this was soon rectified as the live band starting playing 40s jazz music that pacified the older people. They took to the floor and waltzed and tangoed so well that I was ashamed of my 90s style-dancing!

The casino opened after dinner and at the end of the evening three prizes were awarded to the people who made the most amount of money on both the roulette and poker tables. Thanks to Badsha Quadir, Mr and Mrs Pelling and Conservative Way Forward for donating these prizes.

It was a brilliant event enjoyed by all and I would just like to thank my loyal executive for making it all happen- especially Cllr Robert Askey and Cllr Simon Hoar.

For those that would like to view the event's photographs with the possibility of buying one, please contact our photographer; Cllr Simon Hoar at: simonjameshoar@hotmail.com

Over the next year this will be home to London South CF.

London South is made up of twenty seven constituencies and with over three hundred members, this makes us one of the largest CF groups in the UK. We currently have three CF branches within London South and are looking to increase this number by at least 100% in the next six months.

This blog will list our coming events and it will also detail useful information about the main party, Conservative Future and our affiliation organisations.

Feel free to comment on any of the posts written here and I hope that you find this a comprehensive and useful tool to use over the next year.